Trigger trombones are those that have extra tubing. These can be arranged in an “open” or “closed” wrap, often activated by a mechanical or string linkage. Either the former or the latter plays the role of the “trigger”, hence the name. Research suggests that this type of attachment was invented by Christian Friedrich Sattler, a German instrument maker of the 19th century. Thanks to him, changing between notes has become easy for players, allowing them to reach the F key and lower tones. Because of this, most of them are considered tenors.

As was mentioned before, there are two types of trigger trombone: Open and Closed, also known as “traditional”. The former allows the F-attachment to go beyond the crook of the bell section, while the latter keeps the tubing confined within. Now, when it comes to which one is better, the majority prefers open wraps. This is mainly because the airflow is least restrictive due to it having fewer bends than its traditional counterpart.

The closed wrap is not without its advantages. It has been said to have just as good airflow as the open wraps, despite the number of bends it has. Another good thing about this arrangement is the fact that it protects the tubing from dings and scratches, as well as damage to the tuning slide. All of this without mentioning that is less exposed to accidents. A closed wrap is often recommended to beginners before they switch to its open equivalent.

Trigger trombones are known to have two types of linkage: String and mechanical. Although they share a purpose, the difference between them lies in what keeps them together. Mechanical linkage has metal arms with ball and socket joints, requiring less maintenance than a string. The only disadvantage is the clicking noise it makes. On the other hand, the string linkage, as the name implies, moves the parts of the valve with a string that is wrapped around them. Despite being a favorite due to how silent it is, the strings tend to break and need adjusting.

Speaking of valves, trigger trombones often operate with a rotary variant. Our friend Sattler was the first one to implement them in 1839, so it goes without saying that it’s a classic. Its ergonomic design and short-throw have only one weakness: impeded airflow. This is mainly because of the angles it nestles within. Nevertheless, the durability and ease of maintenance make the rotary valve a favorite. There is also the axial flow valve, with fewer angles than its predecessor, as well as the Thayer(Bach) and CL2000 (Conn), which are known for designs with improved airflow.

Now, which trigger trombones are the best? 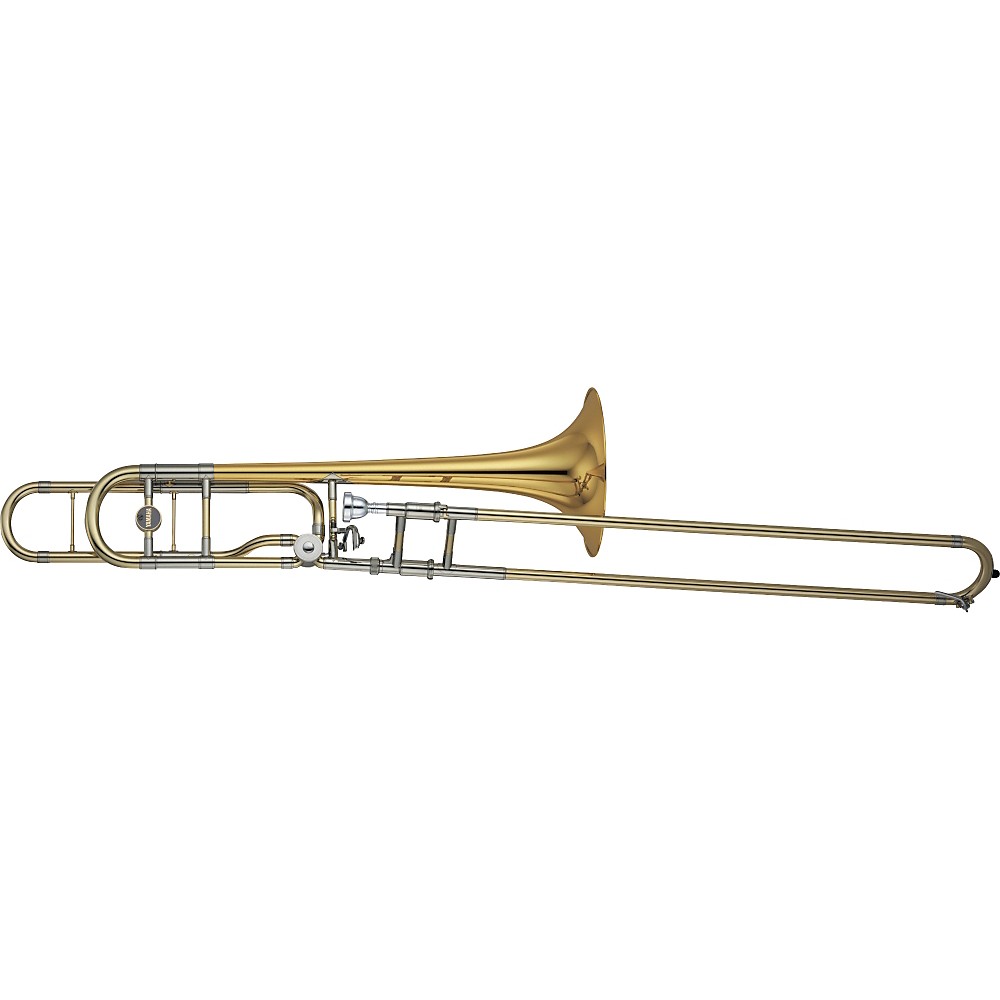 Conn trigger trombone 88HO features a .547” large-bore design with an open-wrap F-attachment for less resistance. This trombone works well for solo or section work. Since being introduced by C.G. Conn in 1954, the 88H has remained in continuous production since its introduction, a record that is unequaled by any other American symphonic trombone. In the 1990s, changes in musical tastes and literature requirements brought about the development of the second-generation 88H, the 88HO Symphonic Series. 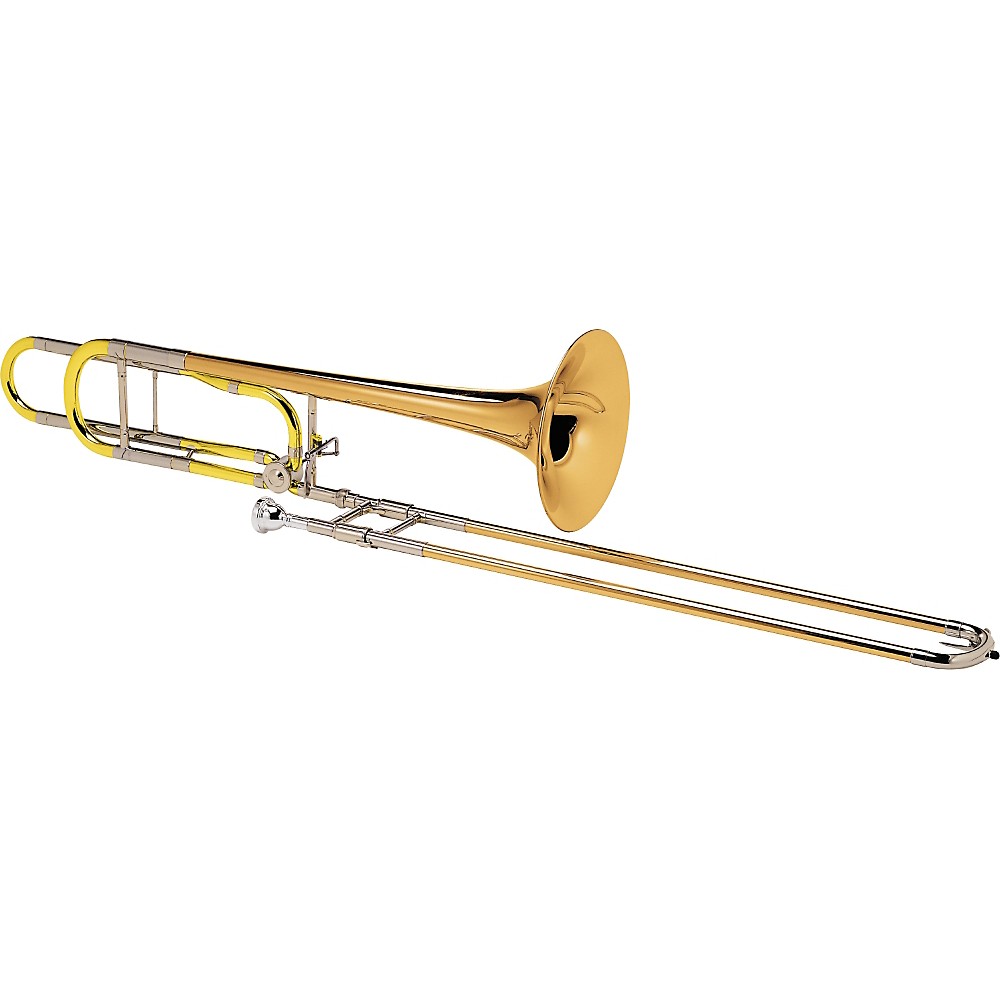 The 88HO offers an open-wrap F-attachment for a free-blowing attachment with less resistance than the standard 88H. The 88HO also brought about the 88HKO, which offers a 9″ bell compared to the 8.5″ bells of the series. This larger throat bell offers the player additional resonance and projection for the demands of today’s music.

The Bach Stradivarius model 42 trigger trombone is a best-seller and the ideal instrument for both advanced students and professional trombonists. An open-wrap design results in fewer bends in the tubing, which creates a free-blowing trombone. 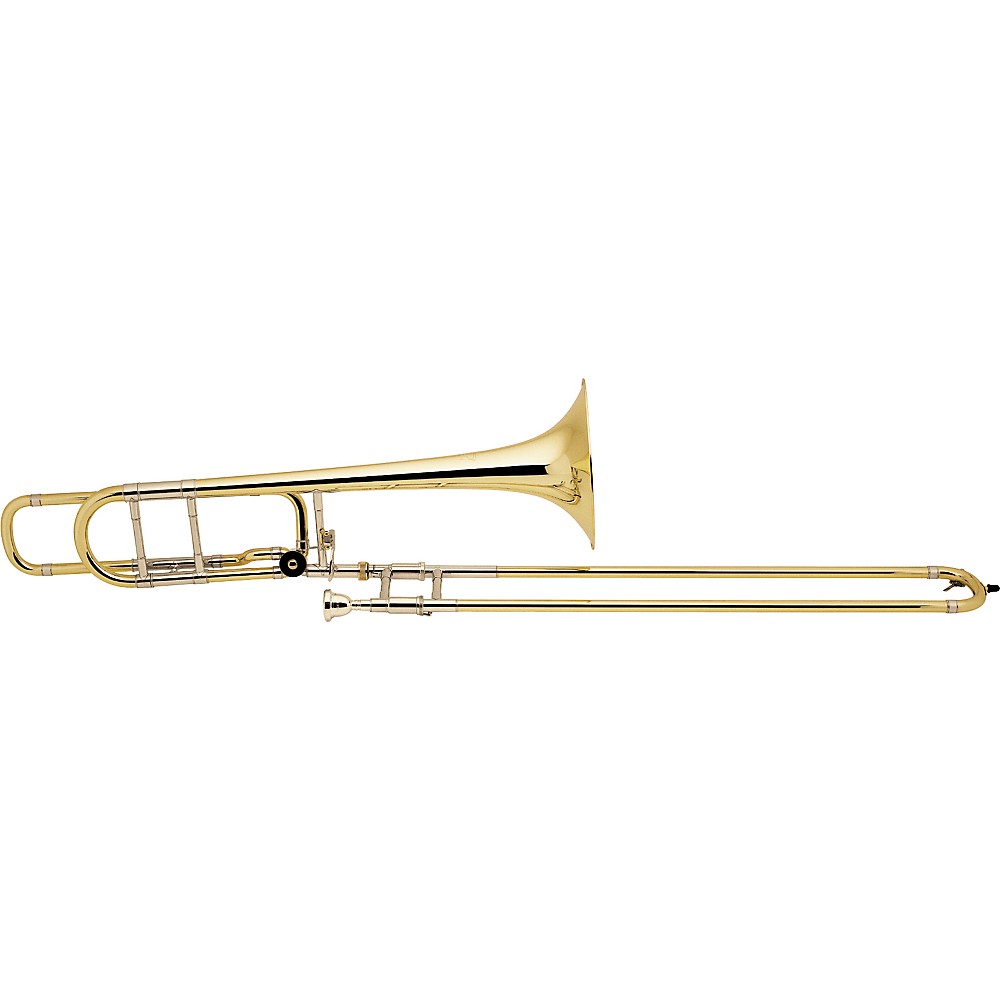 The Bach trigger trombone 42BO’s 547″ bore and 8.5″ bell produce a large, symphonic sound with clear projection. Included with this Bach Stradivarius F-attachment trombone are a case and mouthpiece. The 42BO Series features an open wrap F attachment section. The open wrap offers a more uniform sound, so when you use the F-attachment, the sound is not different from the sound of the trombone without engaging the trigger.

Bach Stradivarius trombones are famous for their fullness of sound and projection. This is achieved by the use of one-piece construction, allowing for unrestricted vibration of the bell. In addition to the shape of the bell flare, the type and thickness of the bell material also affect the sound. Gold brass, which is softer with a red tint due to a higher copper content results in a warm tone. Silver-plated bells create a full complement of partials, or overtones in the tonal spectrum, for a focused sound with great projection. Trombones with a heavyweight bell in yellow or gold brass can be specially ordered for a player needing an instrument for situations involving dark qualities or high-dynamic levels without distortion.

Lightweight hand slides, denoted by LT before the model number, indicate a handslide made of nickel silver. The weight of the slide has been reduced by using nickel silver tubing on the outer slide tubes. Lightweight slides offer a quicker response than traditional yellow brass slides and are also more resistant to corrosion. 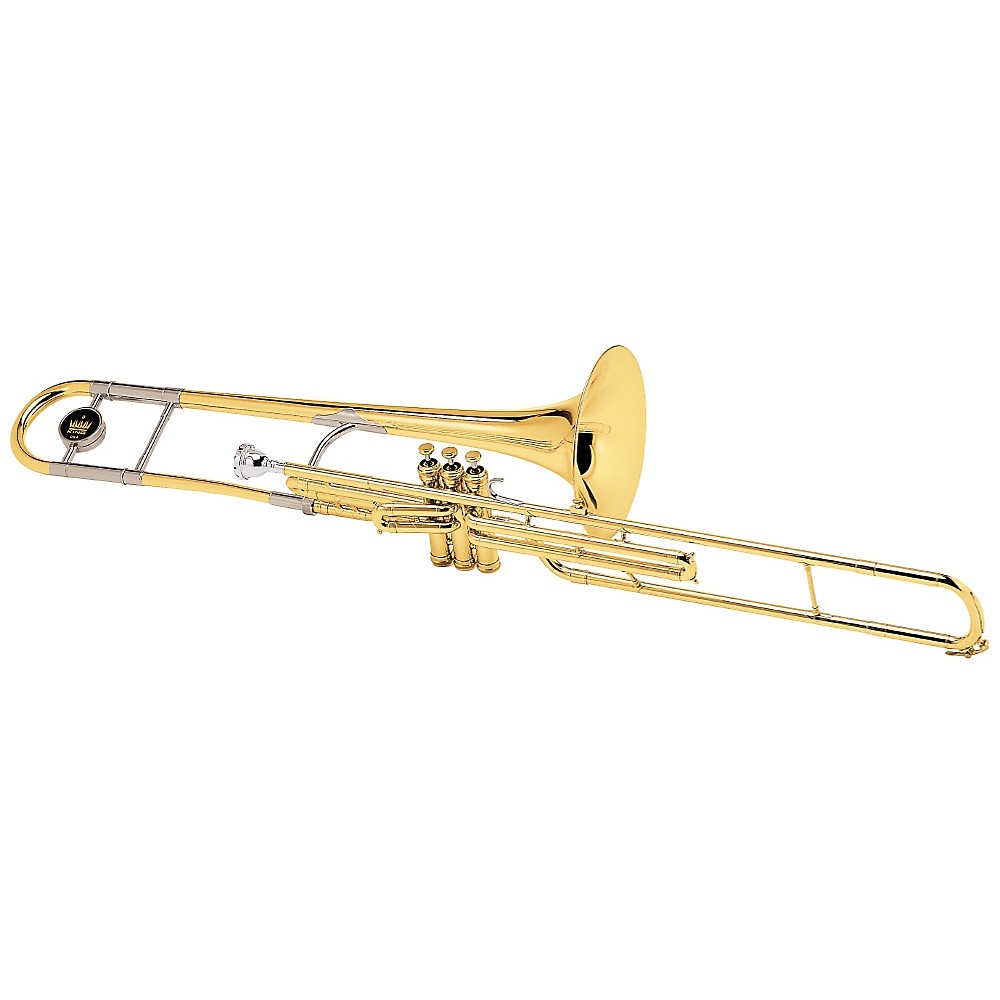 The legend King trigger trombone 2166 3B valve trombone has a .481″ bore, 8″ bell, lacquer finish, 12C mouthpiece, and wood shell case. It combines the responsive and unique King valve section with the musical characteristics of the King 3B trombone. 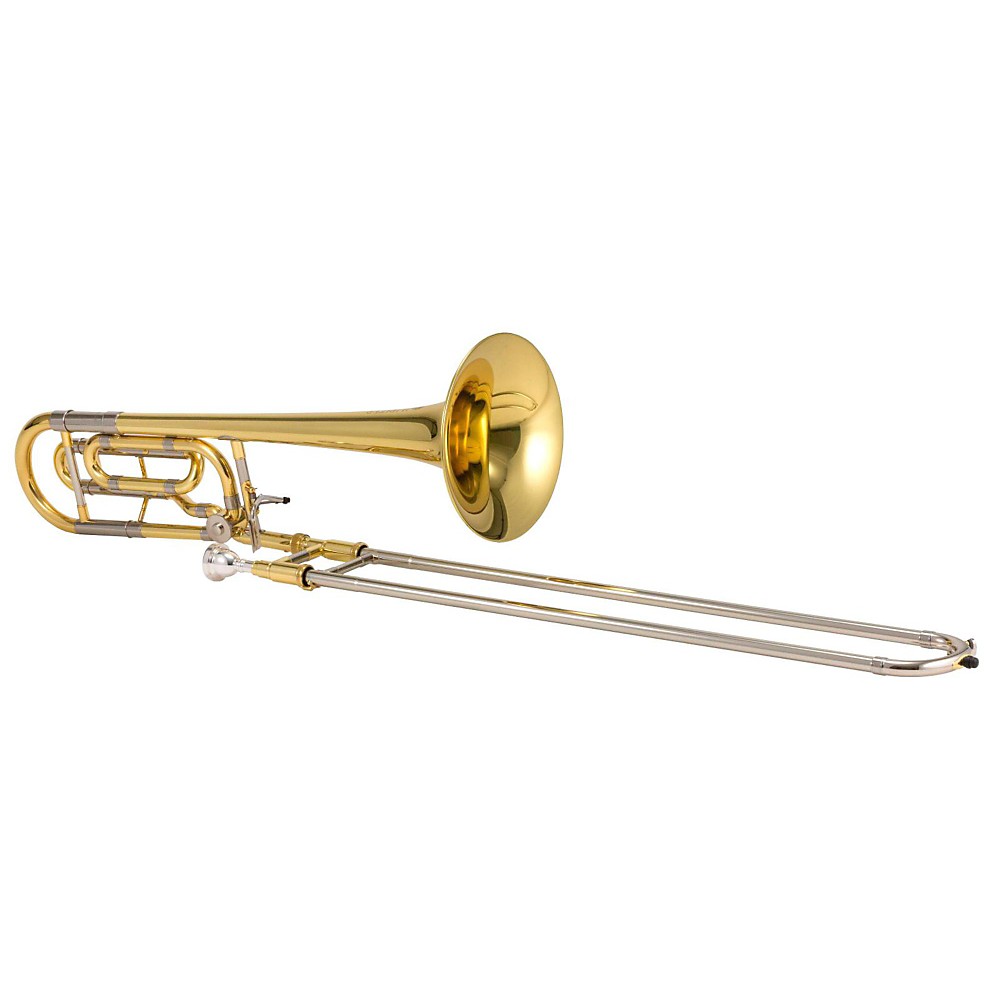 The Jupiter f trigger trombone JTB1100F is a perfect trombone to move into when searching for a quality, affordable intermediate trombone. This trombone features a medium-large bore for a more free-blowing instrument plus a modified open wrap F Attachment for less resistance.

If a student is fortunate enough for this instrument to be a possibility as a first horn, consider this an instrument that will see the student through his or her secondary low brass studies. Lacquered Brass Body is produced using state-of-the-art technology to ensure an instrument of the most accurate scale and playability.

A Nickel Silver Outer Slides provides increased resistance to denting or damage to the instrument. 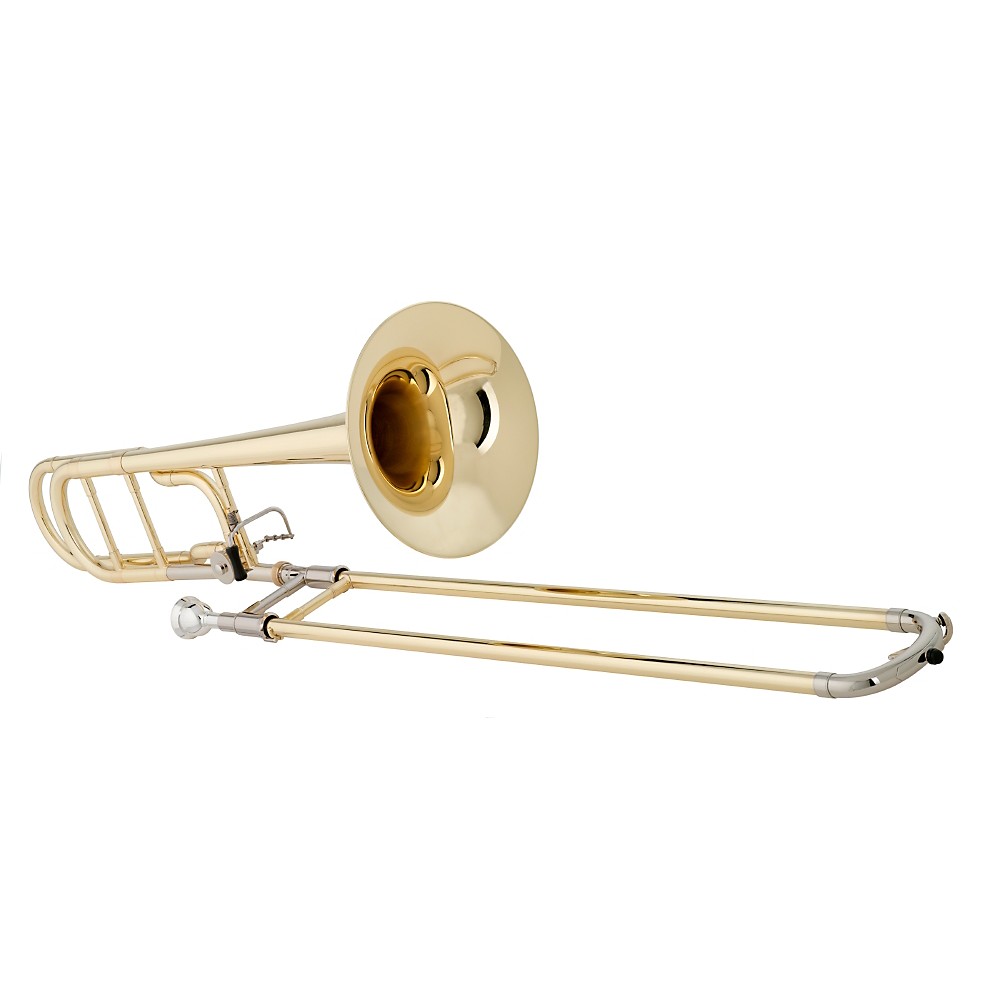 Getzen trigger trombone Capri blend affordability, dependability, and performance. Capri Trombones are designed for trombonists looking to move up from their student instrument or for more advanced players looking for an affordable F attachment alternative. The 547 trombone features a handspun bell, a hand-straightened slide, and a hand-lapped, conventional rotor. Professional-level features at step-up level prices.

The Allora ATBB-450 Vienna Series double trigger Bass Trombone is an affordable trombone for school programs or the advancing musician. The .562-inch bore offers a larger overall sound projected through the 9.5″ yellow brass bell. . Featuring a standard leadpipe, inline traditional rotor, open wrap F-attachment design along with the well-weighted hand slide, the ATBB-450 is perfect for any school program or advancing musician. Comes complete with a premium nylon polyfoam case, a large shank mouthpiece, and a three-year warranty. A used or extraordinarily cheap instrument can actually lessen your child’s likelihood of continuing in music. 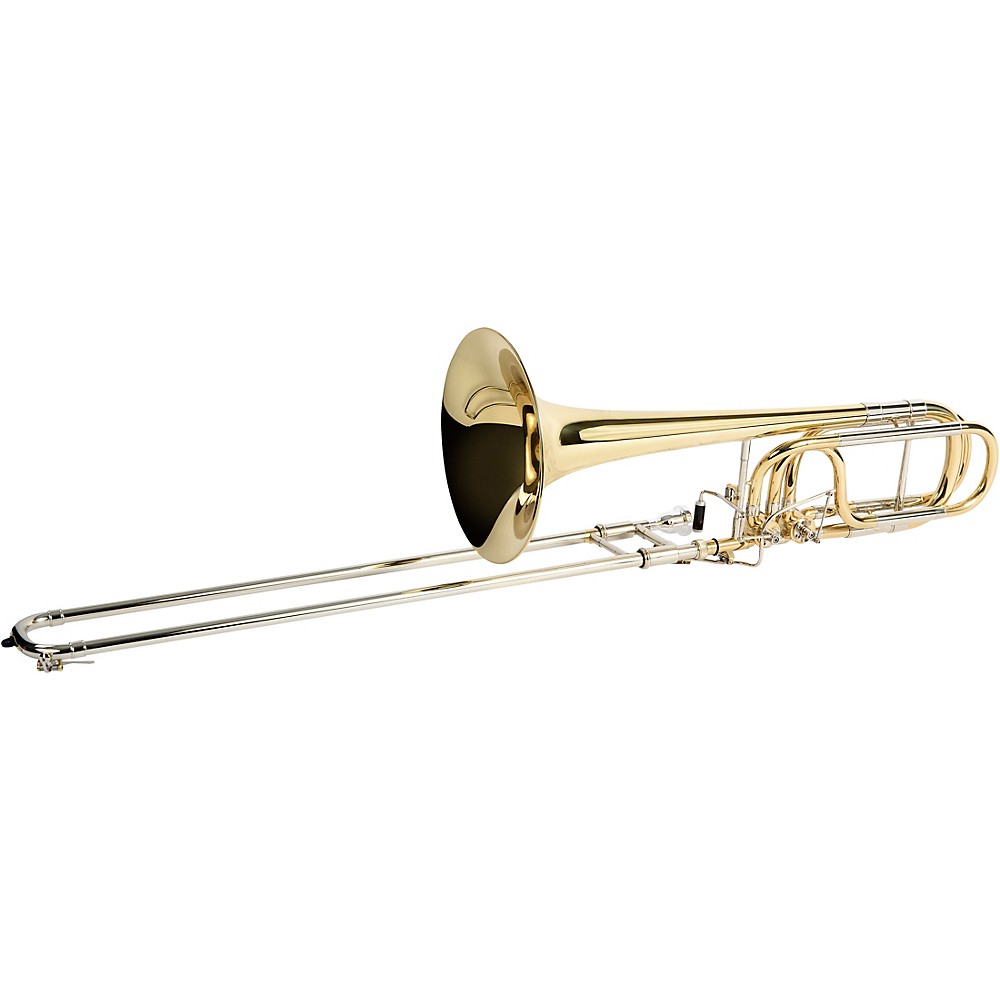 With the Allora Vienna series, you get a quality instrument that will play in tune, withstand student treatment, and inspire pride of ownership. . Allora instruments are carefully manufactured according to specifications and development accumulated over many years by our team of brass and woodwind buyers. The result is a line of instruments that play well, are durable, and possess a satisfying tone and dynamics capability, all with a price that makes it much easier to get involved with music. 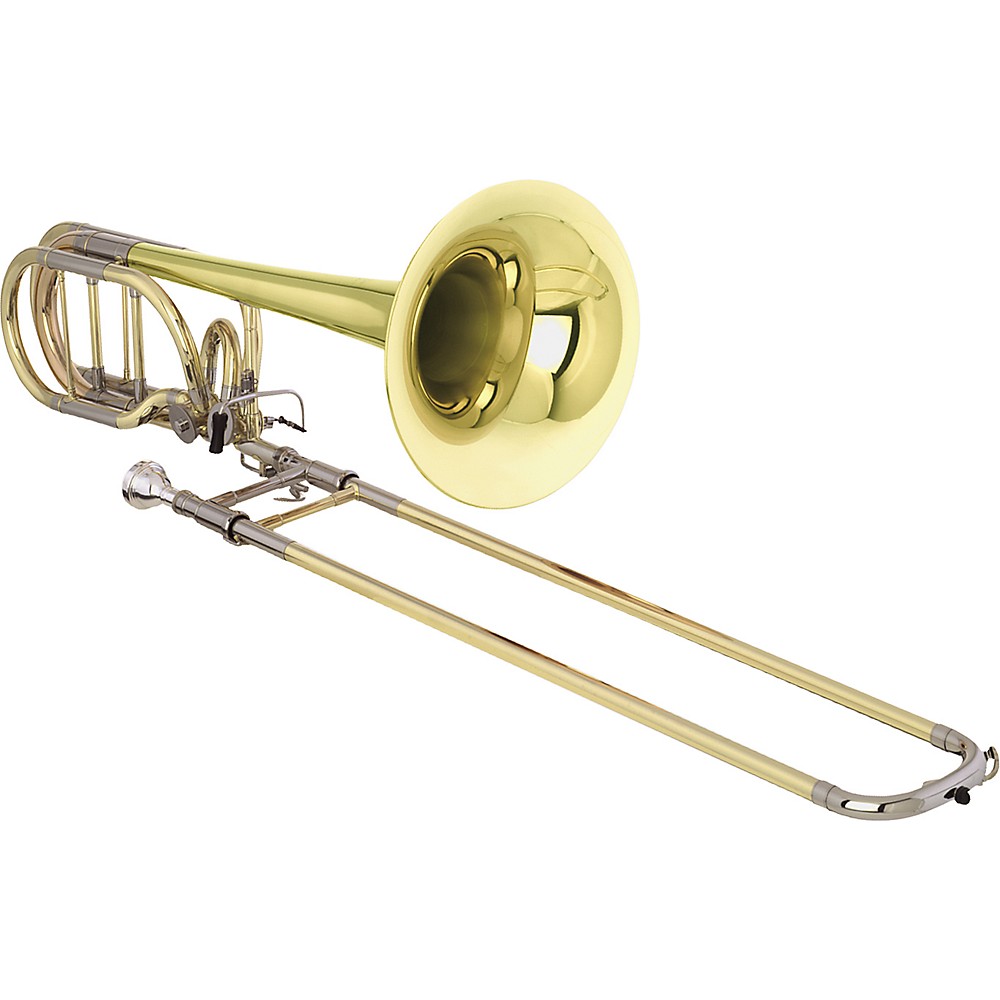 The Getzen 1052FD is a double trigger bass trombone with several compelling design features. The special valve system allows the player to access the second (Gb) rotor without playing through the F. This allows the player several ways to simplify slide positions in the low range. The three interchangeable mouthpieces give the player the added advantage of being able to tailor the response of the instrument from the large bore tenor feel of the number one pipe, to the blending characteristics of two, to the wide-open sound of the number three.

All of these features are amplified by an amazingly efficient, dual gauge bell which is both powerful and beautiful sounding in all registers.